You guys are awesome. Do I tell you that enough? All the feedback on the skull archway was pretty darned amazing... And I'm sure you guys are already over Halloween because of me, but guess what?

Now everyone else is starting!

Which means that I don't feel bad for putting you through it anymore. ;-)

So! Let me just tell you how to build your own skull archway (because you know you want to!).

Oh, before I start, I want to clarify that I did NOT paper mache all of those skulls. Remember when I talked about it here? Yeeeeaaaahhhh, I really was over it. No more skull mache for me. I convinced Mr. Goats to let me buy 7 skulls at $4.99 a pop (got these but took the moss off) - came out to $38 after taxes... (eek, but totally worth it!) and I used some little ones that I had on-hand. To make them not look all uniform, I cut the jaws off with some of them with a hack saw, and cut the back of their heads off so that it looks like they're stuck further into the "mortar".

First thing to do is to build a frame out of PVC pipes. The dimensions are going to change depending on where you put your archway, but I made this using "T" connectors and a few 45 degree elbows. Make sure you glue it all together so that it doesn't fall apart! 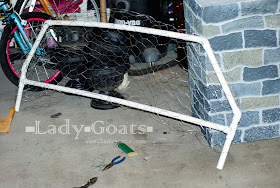 When you're finished with the frame, add some chicken wire to create an archway. I know it's kinda hard to see, but I formed it to arch at the top and the bottom, and tied it with wire to keep it in place. I also let it form organically inside the frame, since I figured that would add interest to the skull placement (so don't pull it too tight is what I'm sayin').

Since I got the cheapest chicken wire, the gaps are huuuuge. I'd never worked with chicken wire before, so I didn't know to pay attention to that.

Learn from my mistake.

It'll save you this next step. 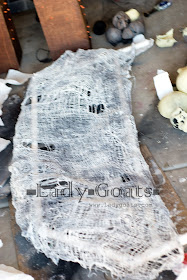 I dipped some creepy cloth ($0.99 at Dollar Tree) in some joint compound and made sure it was good and messy covered, then I draped it over the chicken wire. To make sure it adhered to the chicken wire as it dried, I used some twisty ties and added some compound to the back (that way if it didn't adhere, at least it would dry around the wire, locking it in place - does that make any sense?).

Don't think I expected it to work, but it totally did.

And so my giddy self was too excited to stop and take pictures.

After the joint compound was dry (I let it sit overnight, and it took everything in me to stop myself from going into the garage and checking on it!), I figured out how I wanted all of the skulls arranged and then hot glued them onto the creepy cloth. Now for the other expen$ive part of the project....

Again, totally worth it. 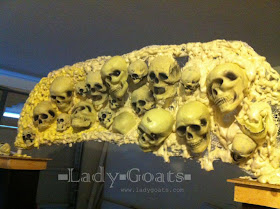 The last step is to paint it.. Pick a color and roll with it.

Let's to a quick cost breakdown. But remember, I used materials I had on-hand, so this may end up costing you a tad more if you don't have some of the items.

This archway cost me $60 to build, bringing the cost of the cemetery entrance sign to about $100 (cost about $40 to build the columns last year, if I remember correctly).

Not bad, considering this measly wire one is $180 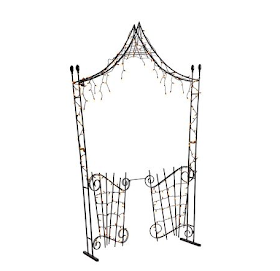 So there ya have it! Now go make yourself one and show me how it looks!

Oh, before we leave, does anyone have any lighting suggestions..? You can barely see the skulls at night!
Gina (Lady Goats) at 8:30 AM
Share