My skull archway at night was a big flop.

Nothing more you could say about it, really. The only time you could see it was when the motion sensors turned on the lights at the front of my house (which stayed on for a minute), and that pretty much destroyed any attempt at creepy that I thought a catacomb-like archway created.

So I asked you all for some advice, and asked around Halloween Forums, and the most prevalent (and seemingly simple) response was to back light it.

Since I already had a few extra strands of lights, it was also the cheapest, so I decided to try that before anything else. 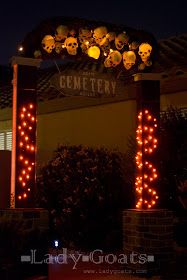 The sign itself still isn't illuminated well, so I don't know that I'm finished with lighting (still have a lot of awesome ideas you guys threw my way that I want to try!), but I am beside myself now that you can see the skulls from afar.

The picture above was taken when I'd turned the motion sensor light off, giving it this great eery glow, and below is with the motion sensing light on. 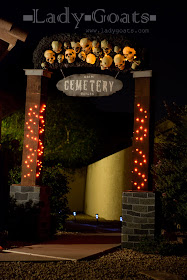 I think it's a little too bright, but the motion sensor takes candelabra bulbs, so I'm thinking that changing them to orange or purple would still illuminate the cemetery entranceway well while still leaving it creepy.

So we shall see!

How is Halloween decorating going for everyone else?! Any semi lighting solutions?
Gina (Lady Goats) at 8:27 AM
Share