Remember when I compiled a list of my favorite Spring projects?

Let's add a mega spectacular one right to the top of the list. 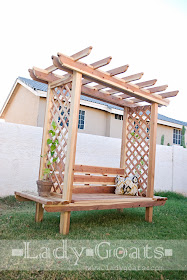 A bench/arbor combo made out of redwood for under $250.

This might actually look slightly familiar to some of you. Remember when Ana White posted the plans for the children's bench/arbor back in August?

I couldn't get enough of it. Obviously the only thing to do was to shamelessly beg her to draw up plans for an adult sized one, right?

So that's exactly what I did!

Let me tell you that I had completely underestimated what I was getting myself into, and when I brought all of the lumber home (and it took over half of my garage) I felt overwhelmed. It was only after I made all of the cuts on the cut list that the pile of wood didn't look so intimidating. 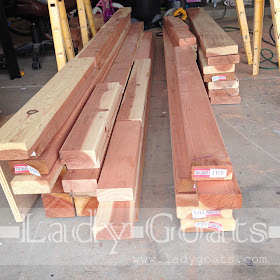 The only thing left to do before assembling was to figure out what shapes I wanted the shade slats to be.

I sat down and looked at countless pictures of pergolas to get a feel for the shapes that I like or dislike, and settled on four possible options. 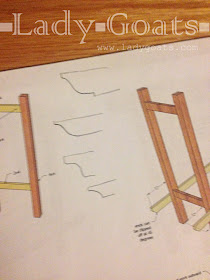 The top one (called an ogee) is my favorite, but it was obviously the most difficult. The big question there is, do I like it enough to justify the added time/effort it would take to cut that out of the seven top slats and both sides of four of the cross beams?

The answer was a resounding "YES!" 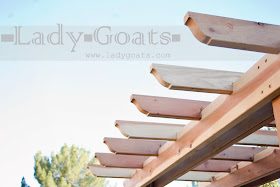 And the best part is that they weren't very difficult to do! 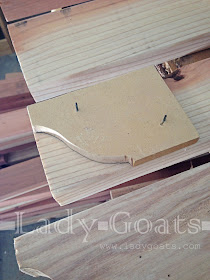 Just made a template out of scrap MDF to trace onto the front of the boards and then cut it out with my jig saw (tried to use a pattern cutting bit on my router - which is why there are nails in that - but I wasn't comfortable enough with it to use it on a real project, yet!).

To make my life easier, I only cut the pattern on the boards that would be at the front of the arbor, though. The back boards just got a 45 degree trim with my circular saw. 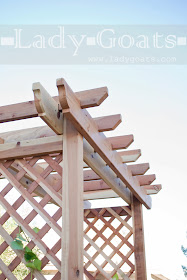 The trick for consistency here was marking a spot on my speed square so that, when it lined up with the edge of the board, I could draw a line and make the cut right along it. 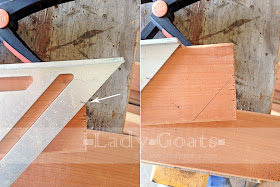 (I did the same thing for the seat aprons, too) 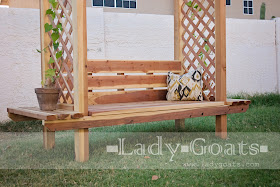 This is the largest thing that I have built, I think, and it's really my new favorite (maybe I say that about every project...). It was simple, but there are some things I want to mention before saying that ANYONE can build this.

First thing, I want to recommend that you build the sides and the seat back support before all else. My 4x4s are 1/8" less than the typical nominal 4x4 widths, which made my sides 1/4" smaller than the plans called for. That meant that my seat/side stretchers had to be 1/4" smaller.

For the back, it just made assembling it easier (built-in spacing!). We put the back in place when we began assembling and adjusted off of it. Also made it easier to know that the sides were squared up.

Second, there was no way I would have been able to do this myself. I hate to play the "small and helpless" card, but there was no way I was strong enough to adjust this as I was getting started. Mr. Goats had to help me with the second and third steps, and I know there would be no way I could have done this without him.

Finally, Lowe's and Home Depot will NOT cut your lattice for you!!! Okay, maybe yours will, but no one at either of my local stores would even touch it, saying that it would crumble under the panel saw. Even the employees that I'm on first-name basis' with (which is my way of saying they're the ones that I've bribed with Panda Express gift cards on a few occasions) wouldn't attempt it. To cut mine, I used a chalk like to mark where I should cut and ran it through my table saw (again, a two person job!), trying my best to avoid the staples.

Mr. Goats'll be the first to tell you that we didn't completely avoid the staples, though.

For finishing, I decided to let the redwood sit out for the summer and will stain it in the Fall. That's part laziness and part what I was told to do to let the sun "open" the wood to rid it of "mill glaze". Obviously I'll share when I do stain it!

I have to thank Ana for drawing up the plans for us. They were so super easy to follow! Make sure you check them out, here! (Will link when they're posted)
Gina (Lady Goats) at 6:57 AM
Share