I have a project that I can't quite call a "build," even though there were a couple of "builds" involved.

Probably not, so let me explain! 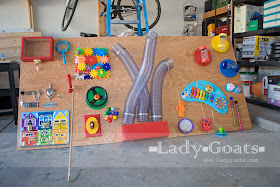 My friend Stephanie converted her 3 car garage into the most amazing Preschool/Day Care. She has defined areas for work, play and interaction and it's blown me away every time I've gone in there. There was a big wall to fill, though, and she wanted a sensory board for it!

There have been so many amazing sensory boards posted online that we had plenty of inspiration to draw from. Something that she really wanted to do was have ball chutes, locks/latches, a doorbell and the spinning hourglasses. Everything else that was done is just stuff she and her sister found at thrift stores and yard sales. Can you believe their knack for finding the most perfect stuff?

Really, the whole thing was a build, rather than me just attaching stuff. After everything was ordered, all it came down to was getting it on the board.

Children's safety was the most important factor in this whole thing. Because of that, I made sure to use Purebond Plywood, which is formaldehyde-free (and also stunning).

I also over-attached some things, I'm sure, but I really thought that it was better safe than sorry.

The ball chutes are actually made from this dust collector hose (except that I got it on sale at Woodcraft for $30). 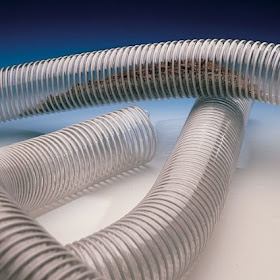 The tube has a wire coil inside, which made it perfect for this project. Even if someone manages to cut a hole in the tube (because we know how kids are), they'll still have good structure from the wires. To attach them to the board, I predrilled a hole through hose clamps and glued/screwed them in place. After that, it was just putting the tubes into the hose clamps and tightening them.

Stephanie found an adorable magnifying glass and they had a great idea to include a shadow box for the kids to find things in.

To build that, I cut a dado through a strip of the Purebond Plywood that I had left over from the main board and built a frame around an 8x10" of plexiglass. 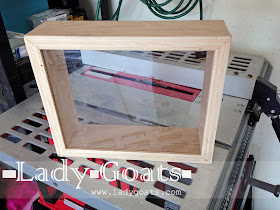 Then ran that through the table saw to get two pieces. 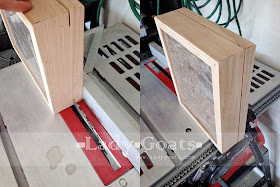 The reason I did it this way is that, sometimes it's hard to make a frame and a back match up perfectly, so if you build it as a single piece and cut it into two pieces, you know that it'll be exactly the same shape. I recommend doing this when building trunks or any box with a lid.

After that, it was time to attach the hardware! I used a locking window sash so that kids couldn't open the shadow box and fiddle with it's contents. 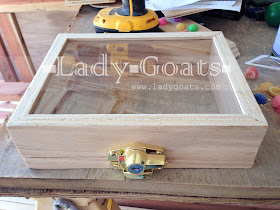 I later painted it, but the gist is still the same. To attach, I screwed through the back piece into the main board.

Other than that, I built the box to catch the balls underneath the ball chute and screwed things in place.

You may recognize the circles that the hourglasses and steering wheel are on. 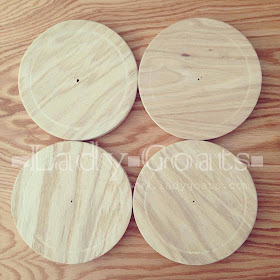 Those were the reason I needed four perfect circles which inspired this post on how to make them (notice the wood in the background vs. the circles? That's just the sensory board with a few coats of poly - I love the difference!).

I can't include links to everything, because a lot was found thrift stores, but here are a few things that I can link to. Hope this helps with anyone wanting to "build" their own sensory board!

I'd love to answer any questions you might have on this, but more importantly, I'd love to see if anyone draws inspiration from this and "builds" their own!

Have you done a sensory board? Is there anything that you included that we left out?

Stephanie had promised to send me photos of the board hung in her space, so I'll update this when I get them!
Gina (Lady Goats) at 9:49 AM
Share